Boisevolve is an organizing principle, and a group, dedicated to helping Idahoans take an active role in guiding the evolution of their society and culture in a direction more supportive of human development and a sustainable relationship with the environment.

We do this through activities designed to build the capacity for conscious evolution in our community. Having this capacity requires, among other things, learning how to engage in dialogue, to examine our assumptions, to think and act systemically, and to design our institutions rather than just inherit them.

Boisevolve doesn’t focus on specific issues or immediate crises, important as they may be. Instead, Boisevolve focuses on process and on how we approach things, on getting to the roots of issues, and on ways of working together. We focus on changing the relationship between people and culture, from the unconscious toward the conscious, from the passive toward the active, from the reactive toward the proactive and visionary.

Boisevolve is locally-based and our activities are locally-focused, but we are conscious of our global context. We recognize, appreciate, and work with the inter-dependence that crosses all boundaries. We keep in mind both the impact of the world on us and our impact on the world.

Boisevolve is not for profit, and volunteer-based. We will be forming a non-profit association in Idaho in the near future in order to provide a minimal formal identity for the group.

Boisevolve is anyone and everyone shares in the vision and joins in the work of Boisevolve. There is no set membership, no formal leadership structure, and no central funding source. We will work with any group or institution—non-profit, private, or governmental—in the pursuit of evolutionary activism and advocacy.

Boisevolve’s organizer is Matthew Shapiro, a longtime Boise resident who has always focused his community involvement around the themes of collaboration, empowerment, getting to the roots of things, and encouraging people to think “big picture and long game.” 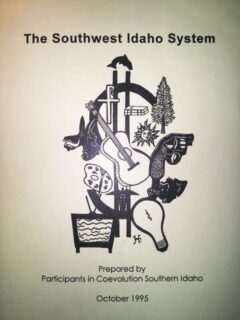 Coevolution Southern Idaho was formed in 1995 with an intent similar to that of Boisevolve, although the emphasis was less on capacity-building and more on direct culture-change projects. The most significant accomplishment of that group’s volunteers was the creation of an in-depth book–titled The  Southwest Idaho System–profiling the Southwest Idaho region. The book was structured to emphasize the systemic relationships among all aspects of the region. With the support of donations, the book was printed and distributed to every public and high school library in southwest Idaho.

The Boise Commons was a non-profit organization formed around 2014 with a mission to build civic capacity in Boise and the greater Treasure Valley. The organization carried out a variety of projects. Many of these were survey-based or research-based and designed to serve as a “mirror,” illuminating things about our community or local culture for which some might recognize an opportunity for action or need for change. These included The State of Boise’s Neighborhood Associations and the results of a survey about voting and civic participation that was completed by 72% of Boise’s high school seniors just before the 2016 election.

Other Boise Commons projects were designed to introduce new, more effective or powerful ways of interacting around complex public issues. Some of the initiatives undertaken by The Boise Commons–such as AssumptionScope–have been inherited by Boisevolve.

The Boise Commons website is still maintained and much of the documentation of the organization’s work can be found there. 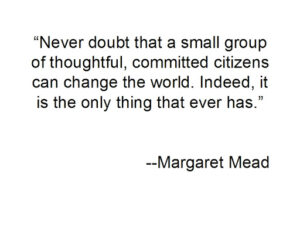 Aside from Coevolution Southern Idaho, there are few direct inspirations we can point to for the kind of mission that Boisevolve is undertaking. The anthropologist Margaret Mead’s famous quote is related to early 1960’s writings in which she describes the need and potential for groups like Boisevolve. In the early 1990’s, the psychologist Mihaly Csikszentmihalyi wrote about the need for “evolutionary cells”–a concept resembling Boisevolve (in fact, he confirmed that Coevolution Southern Idaho was akin to what he had in mind).

We know that there are other “evolutionary cells” out there, although they make look different than ours and have different emphases. We will keep an eye out for them. Who knows? We may inspire others, we may learn from others, and we may work together with others.

Our logo – which may evolve – is obviously based on the word Boisevolve. What serves as the “s” in the logo is an “s-curve.” We chose this because this shape represents the typical pattern of systems undergoing a major shift from a lower order to a higher order:

(1) An initial steady state is upset by some change in the flow of energy or information, leading to…

There is, however, a danger that if a system can’t re-organize to a higher order of stability, it may collapse or “devolve” to a lower form of stability. If this were to happen to society, or to our global ecosystem, it would be devastating for life as we know it. Working toward evolution and avoiding devolution is one of the driving forces being the mission of Boisevolve.